Nagelny connections are carried out rather easily and quickly. In the basis this connection end-to-end strengthened plug-in wooden a thorn.mi or a pin.mi which are pasted in openings are drilled in both connecting parts. In time personal options the design is used in frame and frame. Nagelny connections are widely used the furniture maker as cheap substitute for classical standard connections. At manual production difficult times the metochnykh of works aren’t required, and by means of the nagelny conductor they in general become minimum. 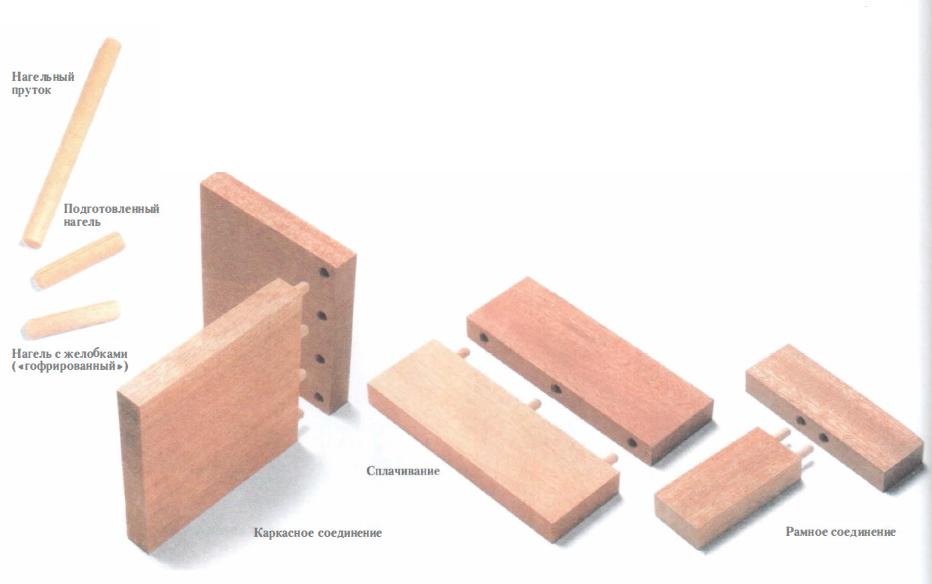 Nageli is made of straight-grained strong breeds of wood, such as beech, birch, maple. It is possible to make nagel most of the preparations (bars or pigs) which are available on sale the nagelnykh. There are also special devices for production of nagely.

For Nagel’s cutting on a mine use a saw with small to teeths. and, strongly holding preparation in a verstachny emphasis for a cross pileniye. To avoid stratification or an otshchepleniye of wood fibers, rotate preparation. If nagely needs to cut off a series identical, use the trailer limiter of length. By means of a saw about cut a longitudinal fillet on each cut-off Nagel that at gluing together to weaken hydraulic pressure in an opening. At last, fill up end faces, that is chamfer with them what it would be simpler to insert nagel into nests.

for this purpose it is possible to use also the special device for removal of facets, and tochily, and a sharpener for pencils. Ready nagel are cut already off by the size, have facets and thin straight lines or spiral fillets on a cylindrical surface which turns out kind of corrugated.

the Device for production of nagely represents a thick steel plate or a plate with drilled calibration openings ми, corresponding to diameters standard nagely. Through openings stretch long preparations bars.

the Holes are usually serrated for the formation of the discharge grooves. Dowel length depends on the required dimensions of the part. The longer the dowel, the greater the surface bonding. The diameter of the dowel can be half the thickness of the wood. Drill holes for pins.

the Strength of pin connections depends on the density of the dowel in its socket. These holes should be smooth, correct form and proper depth. They can drill brace with screw (auger) drill bit electrodrill with a Central twist drill.

If you are working in manual mode, get up to the top was visible the center axis of the hole, as it is important to maintain the vertical position of the drill.

For greater precision, use templates ·there are different models with a choice of sleeves, which not only hold the drill in a vertical position, but also neat features socket.

Use the device for measuring depth or make a depth gauge from a wooden sleeve or rubber tubing.

Twist countersink holes to facilitate Assembly. If you find that the hole is offset from the desired location, fill plug and drill again.

the Markup of the connection If you do not want a series of identical links, markup can be produced by conventional methods.

When joining clamp daughters in a vise so that the edge was at the same level, and face outwards. Evenly distribute the position of the pins and draw lines across the edges. Set a marking gauge to half the thickness of the Board.

the Number and distribution of pins in different structures depends on the beam width. Usually two of them.

They must defend from the edges not less than 6 mm.

Prepare and mark the front side and a clean edge of the bar and the rack. Mark the length.

focus prostrogat the ends of the rails at right angles.

Another method of marking, which is good to use to label parts of an inconvenient form, is the use of centrique — devices with sharp ends that is inserted into the drilled holes in one part to mark the location holes in response to the Noi of the joint. These teats can be made yourself or are покvпными models. To use the method with the finishing nails against the panel make marks on one side of the connection. For rallying use any edge.

frame For angular soybeans;wnania described here, install nenriki in the holes in the crossbar. Hammer finishing nails in the from· tags newrow holes and obconica hats. Put the bar and the stand on smooth surface and remove, slide them to the ends of the nails made marks on the inside edge of the rack.

you Can make a simple template to facilitate the correct positioning of parts during this operation. When applied to the teats of industrial production, are laid out first and proveryayutsya holes in the rack. For those in n are inserted into their appropriate size teats, and parts are compressed. The template is used. 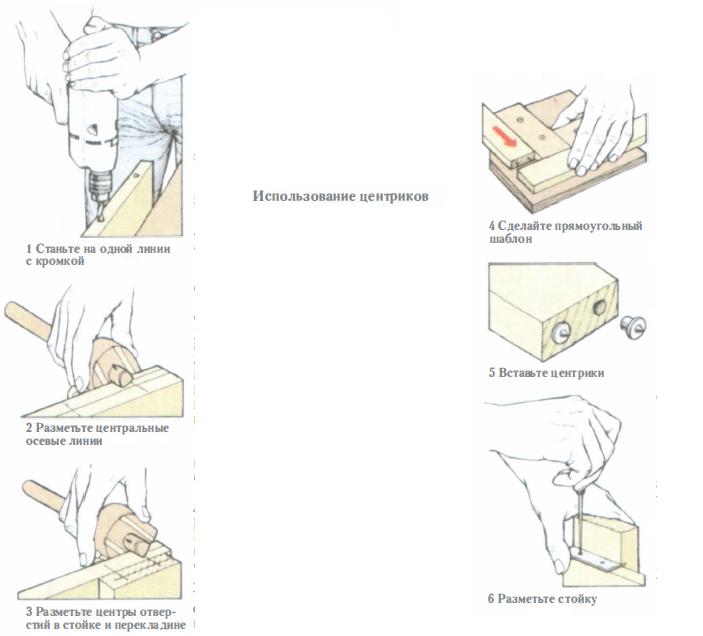 When making the same connection pattern will speed up the marking process. Cut from a solid wood block lock-width perekladnyh. Make the center of the kerf so that not one could put a thin steel plate.

Before you fly with epoxy glue, about mark and drill small pilot holes with the correct spacing between them. Use in th pointed instrument for marking nen spectra of openings through these openings ners. The emphasis of the template must be pushed always to the front side. Inverting the template, do the layout of the rack.

Dowel jig is designed to clamp on the workpiece and guide the drill accurately in the desired location. Some models have fixed values of the guide holes 6, 8 and 10mm pins. Other installed replaceable steel bushings of various sizes.

Install on the terminals of the adjustable pin of the conductor guides at the required distance in accordance with the beam width. Measure the distance from the base conductor.

the guide for drill bit set stops thus to center the drill on the thickness of the material.

Place the jig on the end of the bar and clamp heads. All installations shall be made with respect to the front sides and clean edges.

Drill the holes to the required depth.

Move the movable head and, without changing other settings, turn the template and using a clamp, clamp it on the inner edge of the prepared rack.

Drill the appropriate holes for the pins. 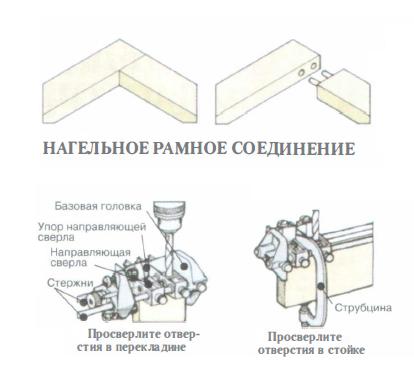 the Conductor can have multiple guide rods to be able to handle a wide Board. In addition, you can purchase dopolnitelnye guides for drills, and an opportunity to make more holes without having to reconfigure the two standard guides that came with the template.

Install in the guide sleeve corresponding to the thickness size. The extreme sleeve is put at a distance of approximately 25 mm from the edges, and the other at a distance of 75 mm from each other. For corner joints, adjust the template so the holes turned out in the center of the Board thickness. Lock the jig at the end of the workpiece movable head. Drill out the holes. 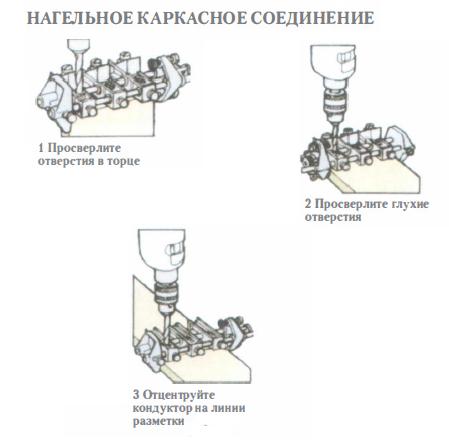 Hold the end of the second billet at the top of the template. Loosen the lower clamping screw and turn the Board along with the conductor. Drill blind (non-through) holes on the other side.

For T-shaped connections guide operations on drilling, as described above. Release the head and hold down pattern across the Board so that the sleeve was on the width of the marking holes. Base th agile must be pushed always to the front side.

Make the bevels on the ends of boards. Install the conductor, as is recommended for corner joints, but the direction of the bevel. Squeeze and slide the guides so that the sleeve is located closer to the inner side where thickness is greatest. Drill the holes, then transfer the template to another Board. 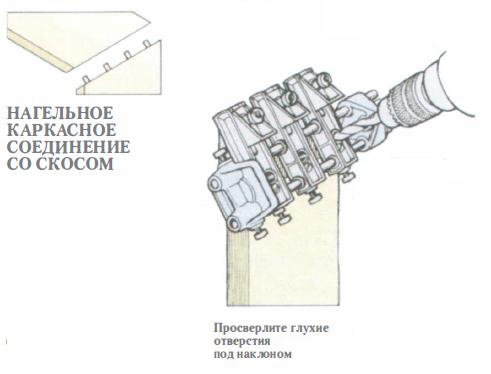