Use of taps is an effective and common practice in the workplace. Getting when tapping is a common method, because of its low costs.

the Receiving thread using the taper tap is the process of removing the workpiece material and the cutting edges, at a certain equidistant distance from each other. 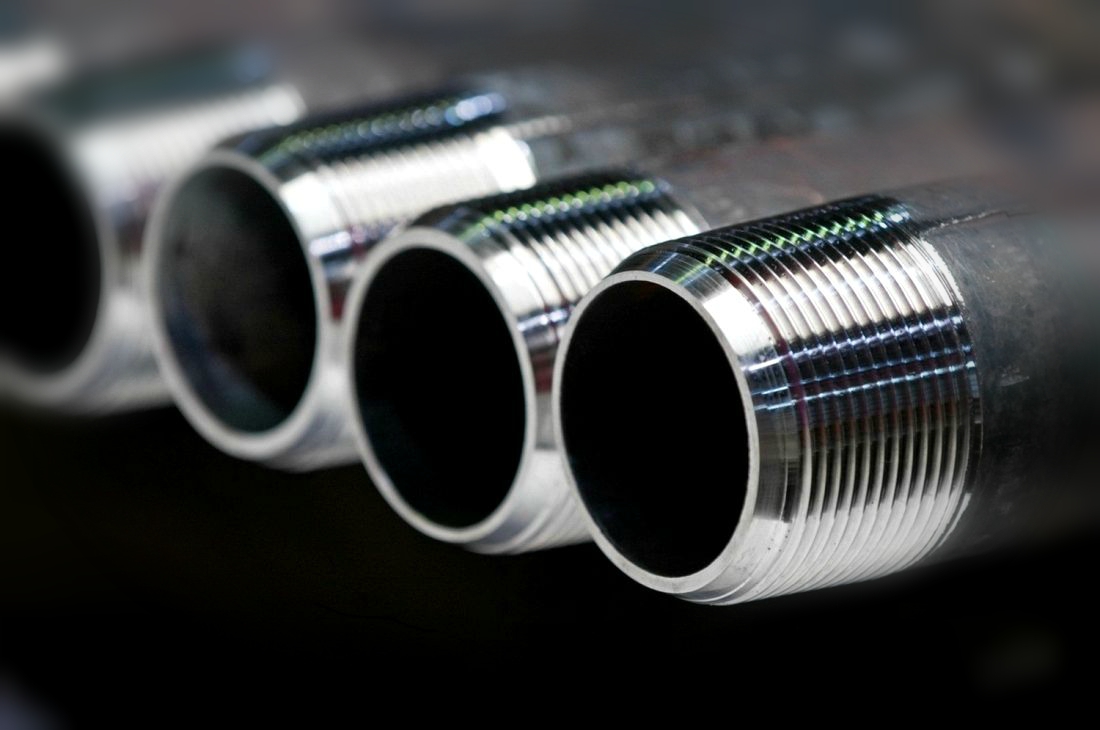 1. Upon receipt of the thread taps is not possible to use the multipass processing, the thread immediately, there is no possibility of adjustment during cutting. For this reason, the process of obtaining the thread is hard because we need to get all the shavings in one pass of cutting (this is very important when machining soft materials with a drain chips clogging flutes).

2. In the process of getting the hole thread diameter larger power for rotation of the tap at a machine may be missed, which poses additional requirements on the equipment. For example, it is hard to cut the threads in diameters greater than 18 mm.

3. In the process of obtaining the thread in the holes of small diameter (less than 4 mm) flute of the tap clogged chips and just break down.

4. To reduce the number of defects in the tapping need copious coolant. This is due to the close contact of the tool and the surface of the hole during the cutting process.

5. The diameter and pitch of the threading process are constant values, so a single tap can cut threads in only one size.

Every tap designed for a specific thread for which you selected

diameter of the chamfer of the tap,

also, the calibration portion of the tap,

thread pitch of the tap.

the Advantages of receiving internal threads using a tap wrench

1. Taps suitable for machining of any material not exceeding the hardness of 65 HRC.

2. There are taps with a special groove for different type of material to be processed (for example taps OSG)

3. Large depth of thread (more than 3 diameters of the holes). 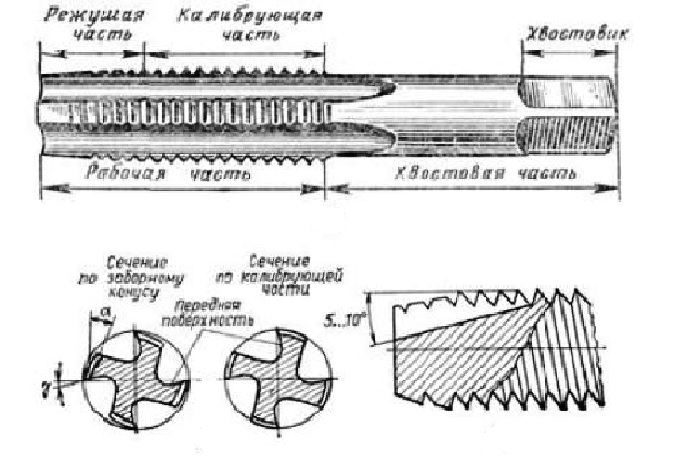 the Cutting external threads with dies

Within the plate are installed special the rollers having a thread. The metal in the receiving thread using the die is extruded and the resulting surface has a high roughness class, and the thread is accurate. 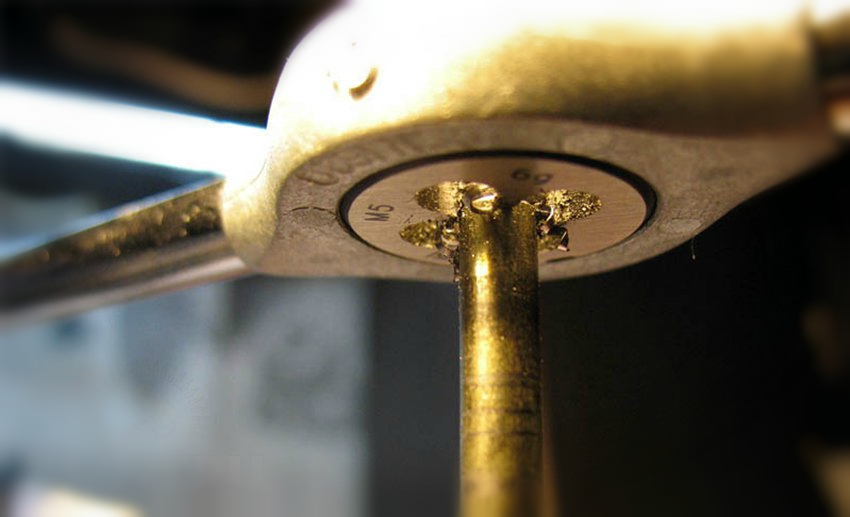 2. Manual labor, there is no possibility to use a CNC machine.

the Advantages of tapping dies

2. Low roughness of the resulting surfaces.

In General we can say that obtaining external threads using die this is the best way for small batch production.

forming Taps used for internal thread depth up to four hole diameters. The peculiarity of this treatment is the complete absence of chips, because threading taps deform the material.

1. The hardness of the workpiece is not greater than 45 HRC. When you thread the material must be very ductile or to have a low coefficient of expansion.

2. Is not possible to process holes with a diameter of more than 18mm due to the generated force when rolling. Such processing is only possible on a dedicated machine with more power of torque.

3. Deformation of the hole after knurling, which makes the process not suitable for aviation and space.

the Advantages of rolling of internal threads

1. The complete absence of chips in the knurling

2. There is no likelihood of breakage of the tool due to the scored tool chips

3. When compared to conventional taps, forming taps have a greater rigidity and are less likely to break. This is because the pressure during the cutting process is directed tangentially and the tap suffers torsional stress , and the knurling pressure is directed radially to the center of the tap, so it’s much safer.

When threading is often used cutters. Cutter when cutting you need to do helical interpolation. This allows you to obtain internal and external thread. CNC machines manufactured in the last 10 years all have this feature. 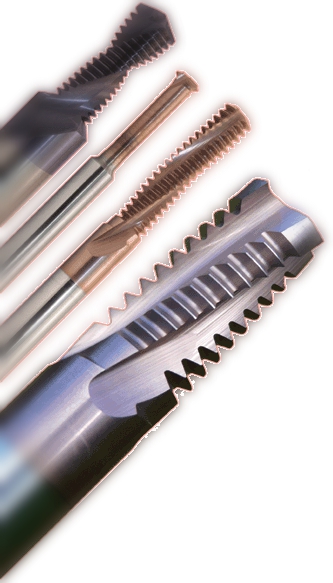 To get thread mill using solid carbide cutters. There are two kinds of cutters for milling threads:

Multiturn – they milled threads the entire depth with just one spin.

single-turn – they milled single spiral thread during one rotation.

it Should be noted that the majority of cutters are sold multiturn. 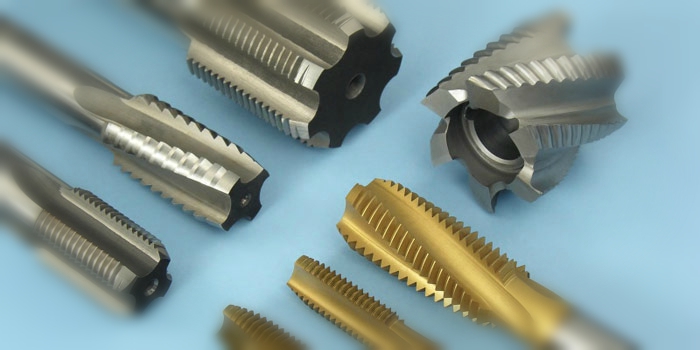 the Cons of a thread cutter

2. Cycle thread milling with a cutter longer receive loop it with a tap.

3. Essential the control program for the CNC machine, and the machine itself.

4. High the role of the operator of the machine when programming and as a consequence a high risk of error. The geometrical parameters of the tap constant, it is made according to the dimensions manufactured with the help of a thread. Sometimes the operator simply checks the thread with calibers, and if these dimensions fall outside the tolerance, then the operator simply throws the tap. With the mill, much more difficult, hence the increased requirements for a CNC operator. 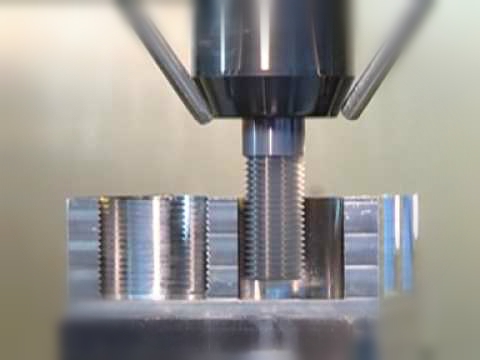 the Advantages of obtaining the thread cutter

1. To handle material with strength up to 66 HRC. One mill can process a wide range of materials.

2. One mill can handle a large number of hole diameters.

3. The bottom surface of the tool for thread milling is flat, so it can be used to obtain the thread close to the very bottom of a blind hole.

4. No problems with chip removal from the cutting zone.

4. Single-turn mill, you can get the thread to a depth of 20 diameters of the cutters.

5. Single-turn mill with long shank very well used in industry, oil industry and electricity for processing pipes. This allows to use one tap for receiving a different thread pitch and diameters at great depths without deflection of the thread profile.

6. With one mill you can get the right and left thread.

7. Geometrically it is possible to combine the cutter for thread milling with another cutting tool, for example with a drill or a milling cutter to obtain a chamfer than is often used by manufacturers of cutting tools. This instrument can simultaneously cut the threads and drill a hole or chamfer.

8. Thread cutting with a cutter is always interrupted cuts. For this reason, not depending on the processed material , is always very small shavings shavings that are easy to take from the cutting zone.

With this method of a thread are used single-tooth replacement and megasurya carbide inserts a miniature cutting tool type for boring cutter.

mnoGoSearch carbide inserts have many cutting teeth on each edge, during this process each tooth cuts into the material deeper than the previous one, reducing the number of passes necessary for obtaining the thread. 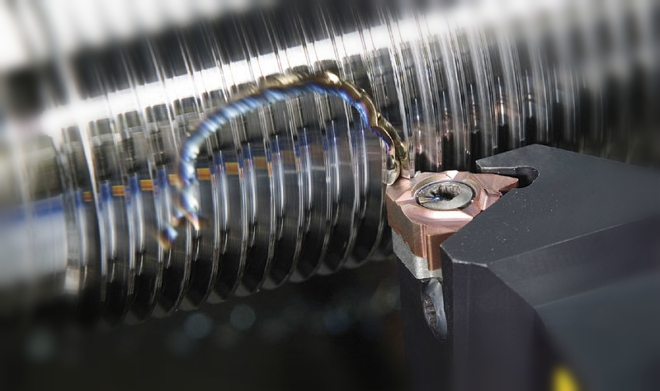 the Cons of a thread turning

1.The high cost mnoGoSearch plates. It is profitable to use only in serial and mass production, at low volume they are not justified of the road.

2. MnoGoSearch plates have no possibility to obtain external thread on workpieces with flanges. If a part has a flange or ledge, the plate will not be approaching close of the last tooth, and the last turns of thread are obtained.

3. You can use a plate partial or full thread profile (megatube are only full face). The key difference is that the plate with a full profile generates a full profile obtained by the thread, which includes vertex threads. When using a partial profile for each thread pitch you would need a different plate.

4. Have mnoGoSearch inserts the sharp tip of the tooth and at a higher pitch, quickly loses its strength, which often leads to increase in time of tapping.

the Advantages of obtaining the thread turning

1. Plates full profile get a very solid thread precision class. High grade thread obtained by this method is associated with simultaneous production of the entire profile of the thread.

2 Receive threads on large diameter holes (up to 50mm). The record for this figure is the threaded hole with a diameter of 915 mm.

3. Lightweight chip. If necessary, you can use the threading from the spindle — this greatly facilitates the removal of chips from the cutting zone. 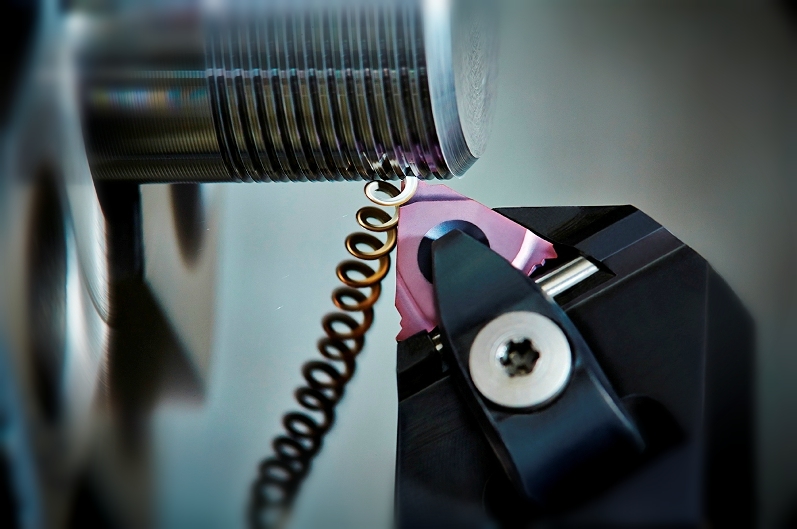 With the help of grinding can obtain high precision of the thread with a very low deviation from size and high repeatability. With one machine you can get a very wide number of types of threads. This method is good for getting the threads on the caliber and nuts for ball screw pairs.

Cons of obtaining the thread by the method of grinding

1. You need a special machine with a variable rotation axis, the stroke of the grinding wheel needs to be aligned with a helix angle of the thread.

2. Not much depth of thread grinding.

4. The high complexity of obtaining the thread in this way.

5. When processing the desired stable processing temperature, and as a consequence requires a very good cooling. 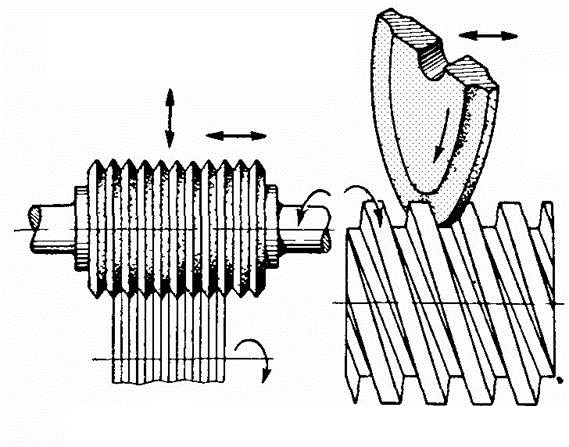 The advantages of obtaining the thread by the method of grinding

2. Getting a thread with high repeatability.

each of the above methods has its pros and cons, if you have any questions ask them in the comments. I will answer.