depending on the design and use of taps can be divided into the following basic types:

1) manual, or locksmith, in a set of two or three pieces or more, used for thread cutting by hand;

2) machine for tapping through and blind holes for tapping, drilling and other machines;

3) the wrench used for tapping nuts. They are made with short, direct and long curved shanks;

4) spot and uterine, are respectively designed for cutting and calibration thread dies;

5) the calibration used for calibrating pre-cut or milled thread;

6) and a conical pipe used for threading pipes or couplings and conical thread; 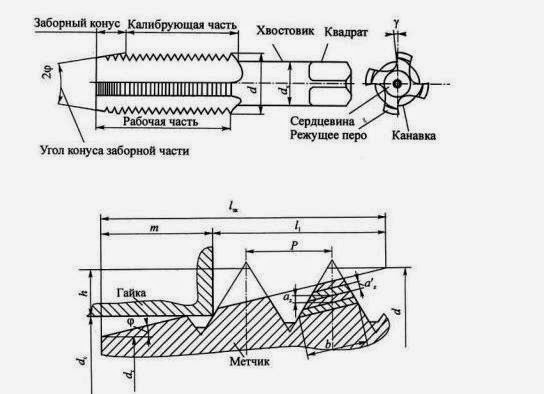 Despite some differences of types of taps, they have a lot in common in the purpose, structural elements and geometric parameters.

Tap consists of a working section that includes the cutting and the control part. The first of them is used for cutting the thread profile and the second Stripping of the thread and the direction of the tap in the hole. The tail, or mounting, portion of the tap necessary to secure it to the Chuck or the tool and for transmitting torque manually or from the machine spindle using the existing square, flats, keyways longitudinal grooves, etc.

the Design of the working parts is largely determined by the adopted scheme of cutting or division of work according to the cutting of shavings between two portions of blades of the teeth of the tap. Cylindrical cutting scheme provides work complete with taps. Thus for one turn of the tap is cut flat chip thick. Conical same scheme is used when the incomplete machine tools, machine tools, conical taps. In the latter case, the cutting is performed in the entire profile, which complicates the cutting process. When cutting a triangular thread in parts made of heat-resistant steels and titanium alloys, as well as when threading a complex form and a deep profile in structural steels is well established taps with corrected cutting scheme.

the Required profile on the product is ensured by the reverse taper of the thread of the tap.

Corrected tap on the thread profile remain the chopped scallop height h, which fits into the acceptable range of 7-8 grades of purity, and between the cutting teeth and the material processed in gaps and, therefore, the contact of the tool with the workpiece is carried out only in the cutting zone. Torque is determined mainly by cutting forces and less friction. A big advantage of taps is improved lubrication and the absence of sticking of the chips on the side surfaces of the teeth.

For the defining structural elements of the tap also includes groove cutting feathers is threaded, the core of the tap and other elements.

From the accepted size and shape of the chip grooves, and the number of plumes depends largely on the performance of the tap. In determining the shape and size of the flute it needs to:

1) was the radius of the shape and of sufficient size to ensure normal host chip;

2) provided relatively equal positive the front corners for the entire height of the thread profile;

3) let the cutting of the rear blade in the reverse unscrewing of the tap from details;

4) contributed to the increase in diameter of the core;

5) provide the optimal amount of regrinding the teeth of tap and sufficient strength of the tooth for relatively small values of the friction forces on the rear surfaces of the tooth.

In turn, the smaller the number of feathers, the teeth , the greater the thickness of the metal layer mm , cut every tooth with the same length of the intake cone of the tap. This specific cutting forces are reduced and correspondingly reduced torque. Usually changing trechery taps motors four blade leads to an increase in the torque by 10-20%.

in addition, when a smaller number of feathers increases the cross section of the chip grooves and a more free placement of chips than eliminates breakage of teeth of taps. However, a reduced number of grooves, can significantly increase the cross section of the feathers of the tap that helps to increase the strength of the body of the tap. When choosing the optimal number of teeth is necessary to consider that the small number of teeth are cut thicker chips and the surface finish of the cut thread is deteriorating. It is therefore recommended to assign the number of grooves depending on the diameter of the tap. So, for taps with a diameter of 8 mm, number of flutes three, for diameters 8-16 mm — three or four, to 18-36 mm — four and larger than 36 mm to six and more. The tapping of small size (diameter less than 3 mm) instead of the regular grooves are sanded two or three flats .

the Most efficient and common form of flute is this, when the front surface of the tooth of the tap is the plane and the curved back is made with a smooth mate with the front surface. The core diameter dc is 0.5 d and the width of the pen S= (0,25—0,35)d. The external angle is 70-80° prevents cutting chips rear blade during unscrewing of the tap.

the direction of the flutes of the tap is determined by the requirements of the chip in a certain direction. When cutting threads in blind holes struzhkootsosy grooves are helical the right direction, and when cutting threads in through holes— left direction . In the latter case can also be used taps with straight flutes, but with the sharpening of the teeth at an angle l = 7-10° on a length of 1.5 h. In the processing of particularly soft and sticky materials the angle of chip grooves is increased to co = 25-35°. 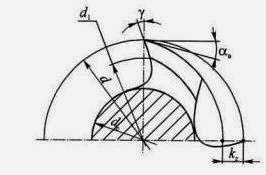 Front angle is 0-30° and rear is equal to 3 to 12° is acceptable on the basis of the well-known recommendations.

Rear angle on the cutting, or fence, parts unpolished of taps formed by setiloane in outside diameter, and grinding satyavani the profile of the tap or the same outer diameter. Satyavani on the profile of the control part helps to reduce friction of the tap. It is done directly when tapping on resubstituting machines. To increase the number of regrinding is done in a special satyavani on the distance of the width of the tooth from the front surface. The reduction in the average diameter is 0,02—0,03 mm on the remaining parts.

To the elements the threads of the tap are:

since the tap at work increases the diameter of the thread, the upper limit of the profile is slightly below the upper limit of the nut thread, and with the wear of the tap lower limit is slightly higher the lower limit of the profile of the nut thread. To ensure the required accuracy of thread parts tolerance on the basic dimensions of the thread is significantly narrowed. In this regard, the taps are manufactured in four degrees of precision, and D—high and normal precision, polished on the thread profile, I’m a regular and reduced precision, not ground profile. Taps extent you can obtain a taut thread and the thread accuracy class 1, taps the degree D and partially E— the thread class 2 and taps the degree I — 3 thread precision class.

According to GOST 7250 limit deflection to the following elements of thread: half profile angle -j — respectively on the outer d and inner d d2 average diameters and thread pitch of the tap’s. Usually the tolerance on half angle (±15′ ±100′) increases with a decrease of pitch and lowering of precision of the extent to Z. Tolerance of the thread pitch will be based on the length (10 and 25 mm) were cut into parts of the tap. The degree of With to I it increases from ±0.010 ±0,070 mm. Increased tolerance of thread pitch mm tap degree E and I is explained by the large errors of the thermal treatment (from ±0.04 to ±0.07 mm) compared to mechanical (up to ±0,0 l mm).