Traditional methods of manufacture of drawers are a classic example of the use of the connection «dovetail» when peculiar weave of thorny elements used to the resistance force applied to the front wall of the box with his nomination.

the Connection «dovetail» in the lock can be done in different ways. Some masters attracts a decorative repeating pattern. The performance of all the varieties of the «swallow’s tail» — an interesting challenge for any wood processing and furniture group

The end-to-end connection dovetail a Through dovetail is the traditional joint for articulation of the ends of the boards from the array. It is widely distributed in the constructions of boxes and furniture. Machine for the manufacture of such compounds applied electric milling machine and special attachments.

The spikes Layout Install cutting marking gauge to the thickness of the wood.

Then mark the nests (or partitions between them). The size and number may be different, depending on the width of the boards and type of wood (soft varieties require larger and are located less spikes than solid rock). No less varied may be the appearance of the finished joint. Roughly to give the product the appearance of the spikes should be of the same size and evenly spaced, but wider than the partitions between the nests.

Start drawing a pencil line across the end face of the workpiece at a distance of 6 mm from each edge, then divide and mark the distance between them into an even number of equal parts. Set aside for 3 mm on each side of the marks and draw lines across the end.

Mark the bias spikes on the front side with the help Malki or stencil for «dovetail». Mark the excess in order to avoid confusion.

The Cut spikes Set the blank so that one side of each tongue was directed vertically. Using nagradki saw on one of the lateral vertical faces of each tongue. Stay close to the line marking the waste side and take care not to gash on the line of shoulders.

Reinstalling the workpiece in a vise, cut the other side edge of thorns. Install the part in the Vice horizontally and cut off the waste side of the line of shoulders. The primary surplus of wood between the spikes, remove the openwork saw.

the Remainder cut away with a chisel or a chisel with an oblique cutting edge, working from both sides towards the middle to the line of shoulders. 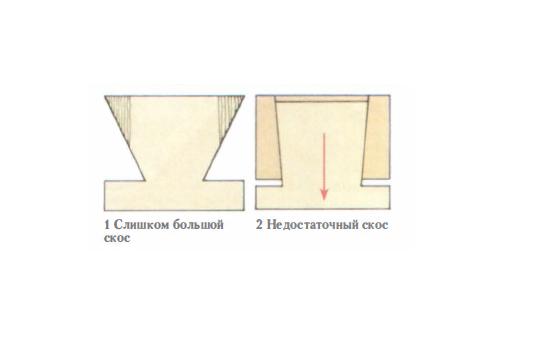 The Marking of nests RUB the chalk end of the prepared intermediates and install it vertically in a vise. Put the item with cut spikes at the place, checking under the front sides of the connection parts. Carefully align the edges of shoulders and the line of spikes on the end, covered with chalk, and mark the shape of the spikes by using a Scriber or knife, then continue the line to the shoulders on each side of the workpiece with the slots. With a pencil, mark the excess.

The Cutting sockets mount the workpiece vertically in a vise. Saw to the line angles of shoulders, spaced on the spikes. Make a slit at the waste part so that it just touched the line marking. The main part of the waste between the walls of the sockets, remove the openwork saw, the rest cut exactly to the line of shoulders with a chisel or a chisel with a beveled cutting edge. Work with two sides to the center. Scrub the corners, holding the cutter under the fragile inner faces of the sockets.

The Assembly connection Joints dovetail very precisely made, and should be collected only once. To check the fit of parts is assemble the product parts dry (without glue) and carefully cut the excess in too tight places. Cleaned up the inside of the parts before gluing.

Apply glue to both halves of the joint and use a hammer and wood trim to protect the surface of the article tightly connect the parts. If you work with a wide connection, tap across the width to exactly to connect the elements. Remove the excess glue before it hardens. When the glue dries, strip the product jointer, working from the edges to the middle, so as not to break off end segments.

The the corners of the swallow-tail the angle of the dovetail should be neither too steep nor too gentle. Too steep dovetail forms a weak short fiber on the corners, while the lack of a bias can reduce the strength of the ligament connection. On a wooden cutting make the markup of the bevel and set the solution Malki either use the stencil or template. For solid rocks, the slope should be 1/8, but for soft wood it should be done is equal to 1/6. 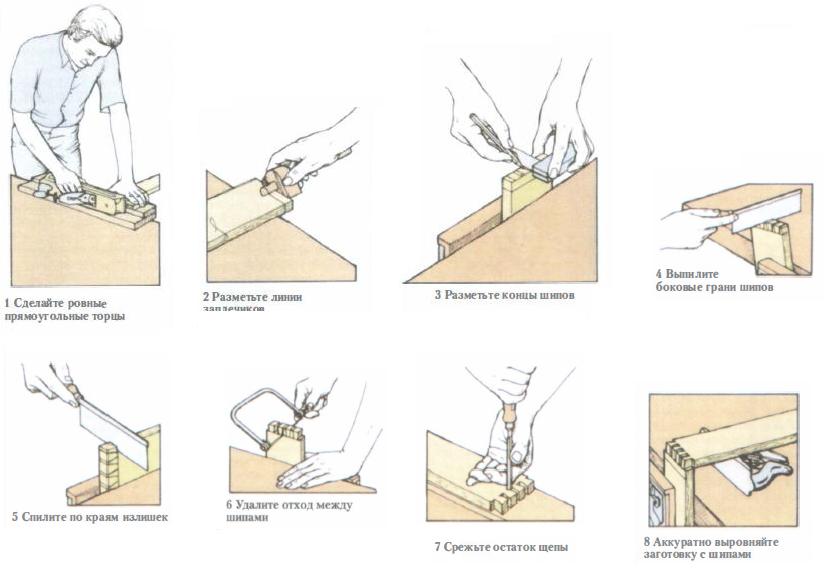 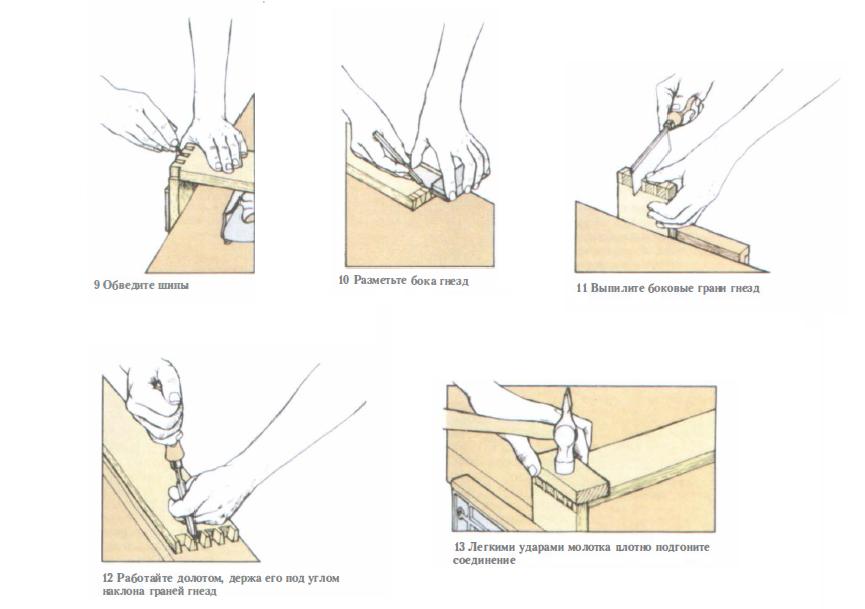 connection Design complies with the basic principles of proportions and disproportions of the connection. The example shown here uses a thinner than normal walls. 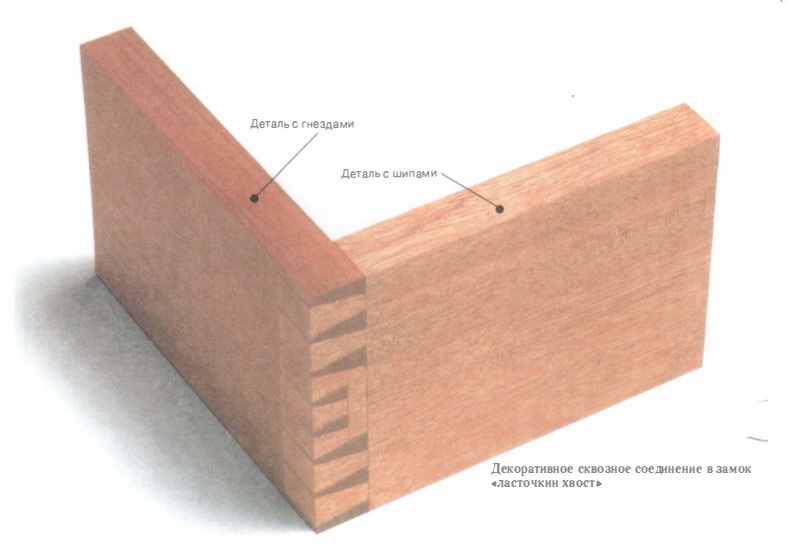 The spikes Layout around the perimeter of the end of the workpiece with spikes put a pencil or very easy marking gauge marking line of shoulders.

Continue the line on the end and mark the excess.