A set of taps | Metalworking

For threading, namely, internal, use a special tool – taps. The essence of this tool is to form the threaded socket inside any product. 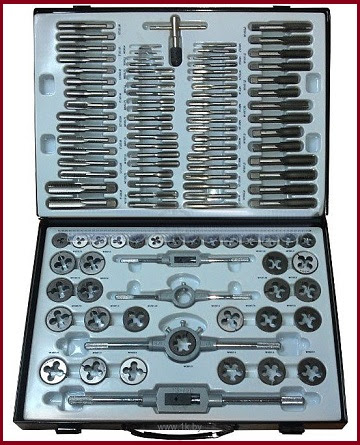 Most are aware the taps plain screw, with special carved grooves that have alternating with cutting teeth. So, one end is attached to the machine, the other end is inserted into the hole and rotated, thus moving thread is created.

Usually for the good quality of the work performed taps trying to pick up under the hole. To create a thread of large diameter, it is necessary to use consistently a couple of sizes. For processing soft material necessary to use a larger number of taps. The number could reach five. Not difficult to guess, in the billet, where there is no opening to start with, get a drill hole, and then, for threading tap is used.

of Course, if we talk about the types of taps, we note that this tool has some variety. These taps are distinguished by some specific features in design, but overall, the essence of the work of the tap one and also.

hand Tap has chamfer, similar to the tip of the drill, then, we can see the thread, then comes the shank. Design and application – these properties have given the classification of the taps. a Thread can be obtained through the use of:

as for the difficulties of the instrument itself, due to the fact that the grooves in the body of the tap contribute to the weakening of the tool body. From-for what there are breakage of taps.

Typically, the tap gain sets. Depending on frequency of use. I propose to consider what sets of taps are.

a Set of taps for blind and through holes

Serve taps for tapping blind and through holes. When the tool selection should pay attention to the shank .

Despite the simplicity of using this tool, still there are some difficulties in the application of the tap if the threads done manually. For example, you need to put physical efforts. Because as we all know, cutting metal is not so easy, moreover, the friction force is large.

for Example, there are sets of the same diameter with a different thread pitch. Or various diameters with various thread pitches.

the Cost of these kits about 1 $

a Set of taps for tapping metric threads

Normally, sets are not only taps, but also dies. Can be cut as internal and external metric thread. The tool is characterized by strength and durability. Convenient and practical. For this set you can give an average of up to 4 T. R. 39 tools.

the Set of taps of high-quality steel

As is clear, the taps are made of high quality steel, which prolongs the working resource.

Often, such sets have taps and dies made from tool steel, taps, complete (for roughing, finishing and interim treatments). Drill, allowing to obtain the desired diameter, medicolegally, plasmodesmata, T-shaped medicolegal.

Respectively, such a set must be purchased, if you need an inch thread. In the kit you can see a few taps, and the cost of a set of 10$

— based tools – high carbon tool steel. There are kits that are designed to repair damaged threads. For primary processing of surfaces they will not work. The price in region 2 Tr

a Set can contain about 30 tool. Is used for cutting external and internal threads. Suitable for professional use. The kit may include holders. The estimated cost is 10.5 $

be useful if you need to cut through the internal checkpoint thread. The kit includes taps of the same diameter, but with different steps. Cost about 200 $. 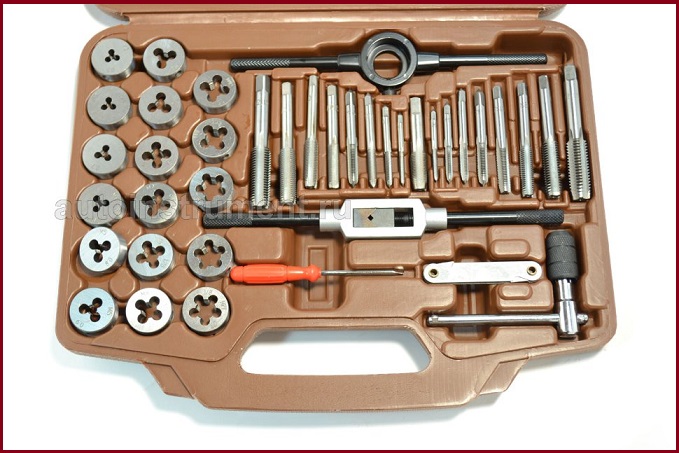