The Most common tools to produce internal threads on machine tools with NC system is taps and cutters. The difficulty of getting a thread with a cutter associated with the complexity of programming the interpolating motion, so the simpler the system, the more frequently used taps. 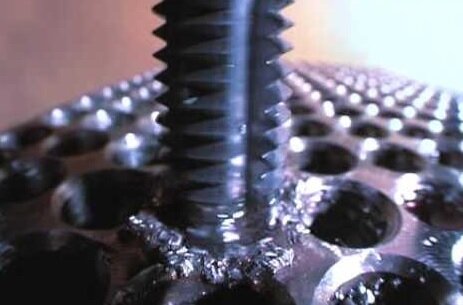 the Principle of a thread milling

When milling a thread profile is formed by means of a special movement of the cutter along a helix. Supply in this case must match the pitch of the tap.

the Technology of production thread milling

thread mill is lowered into the hole to the desired thread depth and cuts through the arc of 90° at depth. Mill when plunging rises to ¼ thread pitch (plot 1-2).

Axis mill M rotates on the diameter of m (section 2-3) the mill at the same time rises to the pitch of the thread P out of the profile in an arc of 90° (phase 3-4).

In case the thread depth obtained in the previous hole is greater than the length of the cutting portion of the cutter, the processing on the area 2-3 is repeated several times. 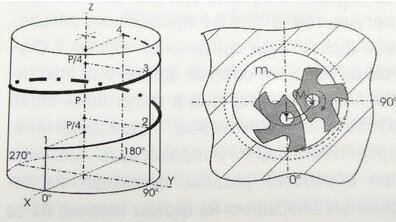 carbide cutters
thread milling cutters indexable
combined screw cutter is cutter allows you to first drill the hole for the thread, and then milled thread 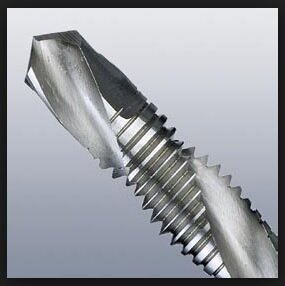 So there are 2 main technologies of producing thread cutters

making a thread with one tool

Types of taps for threading

Tap straight fluted is the most widely used form of the tap. This tap is used for materials which give short chips, for example, steel or cast iron.

the Use of the tap with staggered teeth reduces friction and resistance to the cutting process, which is very important in the processing of difficult-to-machine materials (aluminum and bronze). Staggered arrangement of the teeth of the tap facilitates the access of coolant to the cutting zone.

the Tap with spiral gun nose is straight, shallow flutes. Gun nose spiral are designed to push the chips forward. The relatively shallow flutes ensure maximum strength of the tap on the twisting. They also facilitate coolant to the cutting zone. This type of taps are recommended for through holes.

Taps with flutes only on the chamfer

the Cutting part of the tap has a similar gun nose spiral are designed to push chips forward. This tap features an extremely rigid construction. Recommended for depths up to 1.5 x 0.

Taps with spiral teeth designed primarily for threading in blind holes. The flute pushes chips back, which prevents chip jamming at the bottom of the hole or in flutes. Therefore, the spiral flute of the tap reduces the risk of breakage or damage of the tap.

Chipless taps are different from the usual that form the profile of thread due to plastic deformation and not due to removal of shavings. Recommended for materials with high plasticity. Such materials have tensile strength up to 1200 N/mmg, and elongation not less than 10%.

Chipless taps can be used in normal conditions, but the best results they show in the processing of vertical blind holes. Also available with internal coolant supply.

Die cutters have a huge advantage when machining blind holes. The tap is always needed, the gap between the bottom of the hole and the end of the tap due to the intake cone of the tap. So the tap does not cut the thread in a blind hole. Use of the cutter sieves this problem, since the distance from the end of the first cutters to the cutting edge of the screw is very small. Also a great advantage for milling cutters of the thread is the ability to change the parameters of the thread, which is not possible when using tap. This capability significantly reduces the cost of threading.

Remember that supply is equal to the tap, the spindle speed multiplied by the thread pitch.
the Thread can be cut off when you stop the spindle before you reverse the Z-axis is already stopped, but the spindle inertia makes some part of the turnover. When tapping in steel in this case breaks the tap and D16T softer and therefore thread Stripping. Therefore, for threading on CNC machine need to use a special cartridge — floating or it is called compensating. This cartridge has a spring-loaded rear part of the collet, which can be moved relative to the fixed by a few millimeters along the axis of the cartridge in both directions.

here is General guidance on the tapping operations

the Result of any threading depends on a number of factors, each of which ultimately affects the quality of the finished part.

1. Select the correct design of tap for the treated material and the hole type.

2. Make sure that the item is securely fastened and displacement in the process of processing can lead to tap breakage or poor quality threads.

3. Select correct drill size from the appropriate tables. The diameter of the required drill is also listed on catalog pages with taps. Remember that for forming taps drill required of other diameters. Always control the work hardening of the processed material.

4. Choose the correct value of cutting speed, as shown in the catalog cutting of taps.

5. Use cutting fluid appropriate to the operation being performed.

6. For threading on CNC machines ensure that the feed value chosen for the program. When you use threading cartridge value feed per revolution should be 95 to 97 % of the steps to zamostyany of the tap.

7. If possible, use high quality ammunition with compensation for torque limiting, which ensures the axial displacement of the tap and install it right in the hole. Also it will protect the tap from breakage if accidentally collide one hole.

8. Make sure that the tap is smoothly enters the hole, intermittent supply can lead to a bell-shaped form of primary turns. 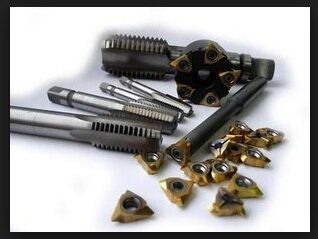